OK, so the title might be a bit sensational. One might even classify it as click-bait. Sorry. I really just liked the way it sounded, but if it manages to bring people in then all the better.

Now, when I say ‘mule’ I mean it strictly in the sense of carrying cargo. I wasn’t swallowing balloons full of tea before flying home or anything like that!

A bit of backstory first. Last summer I was living in London for work. While shopping for some gifts I thought the perfect thing for my friend T would be to bring back some tea. It is quintessentially British and I knew she loves tea. Little did I know at the time that I would forever ruin her previously modest tastes (and likely her wallet in turn). 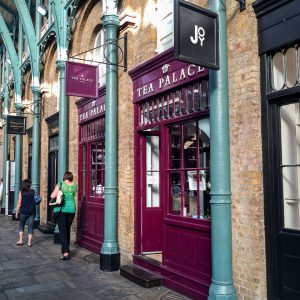 Specifically, I brought her this sampler of 3 teas from Tea Palace. I liked the cylindrical tins. Turns out she did even more. Now, I have never been a tea person at all but I have to say their Palace Earl Grey smelled so good I almost lost my mind. Literally, I would huff the container like some junkie. It made me actually want to try it and, again, up to that point tea made zero sense to me. The rare times I had ever had tea it tasted like plant water… and I mean that in the worst way. So I tried a cup and, surprisingly, I liked it more than I expected to. It’s funny what quality product will get you!

It turns out this was the gateway drug that got both of us a little obsessed with premium quality, loose tea. Soon after, we started going to some local tea shops around Los Angeles, to see how they compared and to find a local source. (shipping from the UK is pricey!) Our first was the American Tea Room in Beverly Hills. We got really hooked on them for a while. The teas are amazing. Eventually, we made our way to Pasadena where we stopped at Chado and picked up a bunch of great samples.

From there we were just looking for variety from anywhere. She and I were already running a food blog called Cast Iron & Wine, so posts about these teas were beginning to make an appearance. The tea cabinet at my office turned up some variety to try; samples from Teavana and some from Fortnum & Mason, which I assume someone must have brought with them from our London office. There was even some green tea I had bought her on a trip to Japan that I lost and totally forgot about for like 2 years. (Though many months past its sell-by date it was apparently sealed really well and still tasted amazing.)

All of this tasting just added fuel to her already voracious love of all things tea. By this point, she was reading tons of tea related books and websites, watching tea documentaries, and doing all kinds of tea research on the side. She was taking tons of notes along the way. At some point, we thought maybe a new blog devoted to tea made sense as a place for her to keep track of all this research, rather than just in some random notebook somewhere. And perhaps some people out there might find it interesting. And so it was! :p

If tea is your thing then you should absolutely check out the blog at Tea is my name.

Now back to the present and the story at hand.

I was just in London again as you know, though this time on holiday. When I went looking for tea this time I was coming at it from a different and more informed perspective and I had a list of places I wanted to hit. Knowing that I likely won’t be back to London for a while, and anything I brought back would be subjects for her blog, I may have gone a wee bit overboard. 🙂

I also had a specific goal in mind. In her research, I knew T had started a bit of a project based on there being 87 single-estate Darjeeling gardens. She wanted to eventually have tasted something from all of them, ideally first flush. So I was definitely on the lookout for those.

Of course, I wanted to go back to Tea Palace as it was their teas that started this whole thing. Oddly, when I went back to Covent Garden, the Tea Palace was nowhere to be found. There was a Whittard in what I swore was the exact same location. Whittard was on my list as well so although I was confused it was convenient. I figured I would look online later that night to see where another Tea Palace location might be. Turns out they closed their store. Seems they are only online and through partners right now. That was a bummer as shipping from the UK is quite expensive so it might be awhile until we have their teas again. 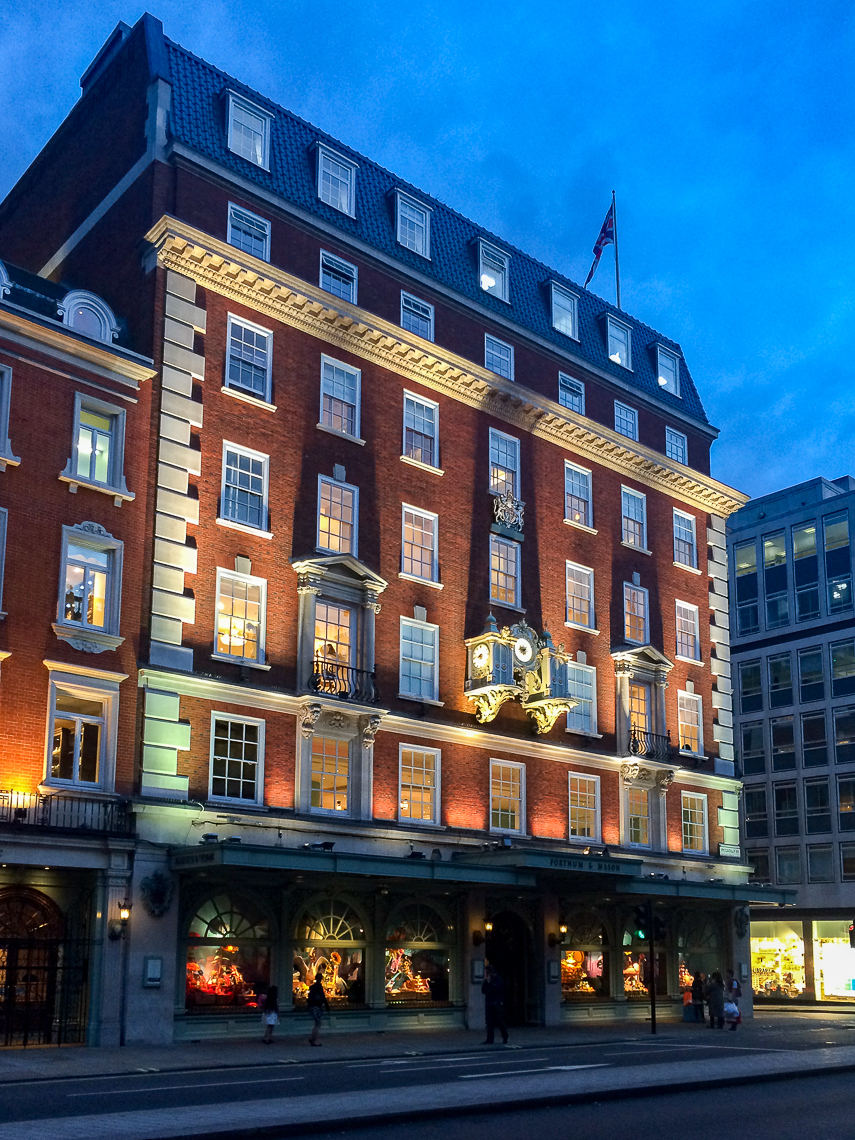 The top of my list was Fortnum & Mason. I went to their flagship store in Piccadilly which has occupied the same space for over 300 years! This place is amazing (and fancy!). And by fancy, I mean even the people restocking the shelves were dressed to the nines, including long frock coats. It’s way more than just a tea store; spanning multiple floors it contains a grocery, tea rooms, bars, restaurants, etc. There are even 4 bee colonies on the roof which produce their own limited signature honey! You can read more about their history here.

I got lost in there for quite a while and I only made it to the main floor. At some point, I really need to explore the rest of the floors.

This is probably the place I went the most overboard. They are certainly not without choice and I am bad at making decisions. So I just bought a lot to save myself the effort. Its probably for the best that I didn’t make it to any of the other floors. 🙂 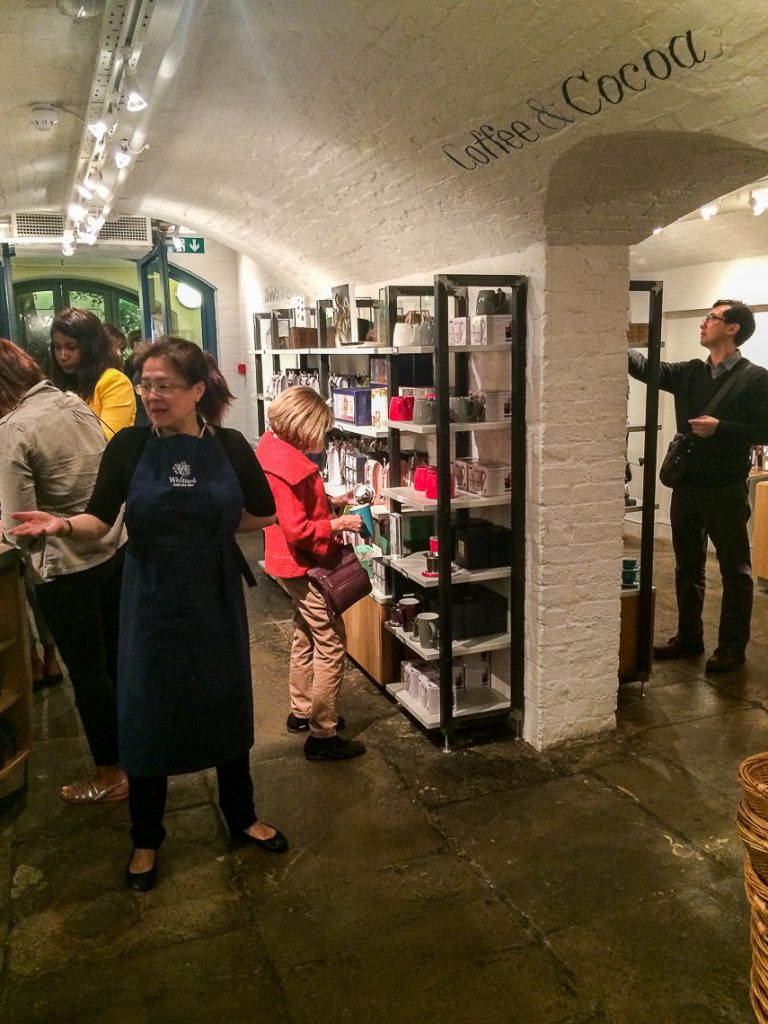 Next up was Whittard of Chelsea. When I was living in London I had passed a number of their locations, only going in once on my second to last day in England when I was looking for last minute souvenirs.

I bought myself a couple of their empty metal caddies that I loved the look of. No idea what I planned to do with them, but I liked them and, really, I felt like I hadn’t really gotten myself any ‘souvenirs’ either.

Overall I did a bit better here, tempered by how overboard I went at Fortnum & Mason, but I did still buy more than I probably should have. At least I got one more darjeeling to cross off the list.

At this point, I was getting a bit concerned that the souvenir buying had gotten greatly off balance, but I kept rationalizing it as a business expense in the end. 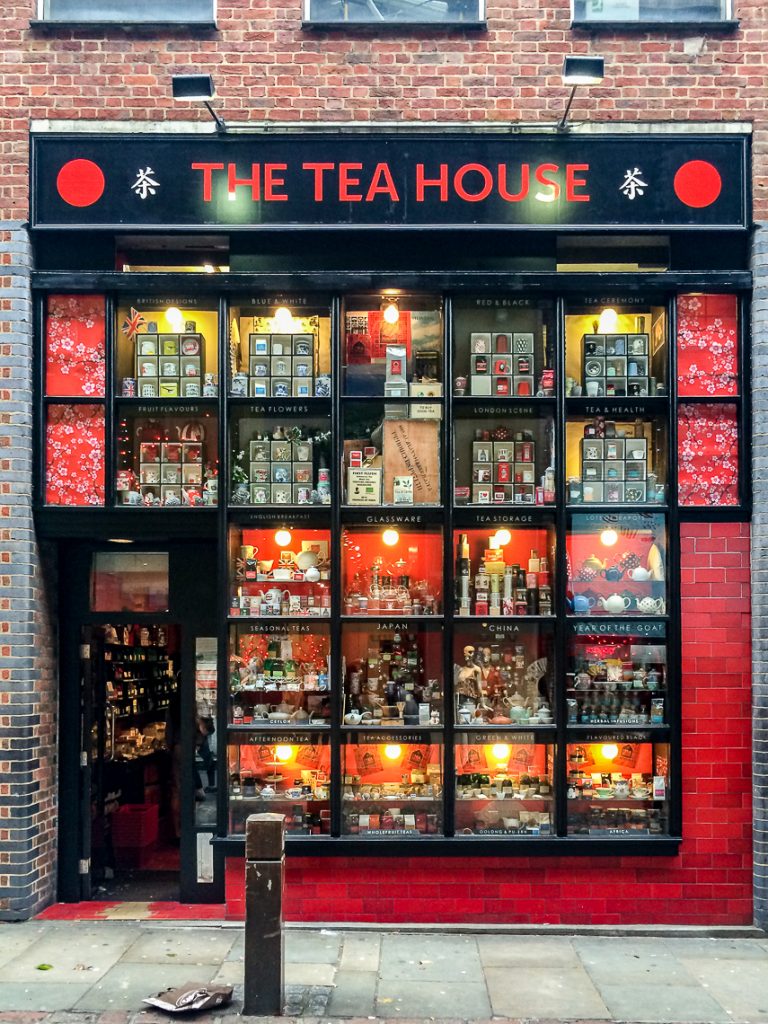 Finally, on my final full day in London, I was doing a bunch of running around after spending the afternoon at the British Museum. I was bouncing around buying all the things I had seen over the course of the week but needed to ‘think about’ and now wanted.

While cutting through Covent Garden I happened upon The Tea House. I had not heard of them before. Initially, I was just taking some quick photos of the outside, as I still needed to make it to 2 more places before they closed. Unsurprisingly I went in for a second.

Long story short, I found some more single estate darjeelings that were way more affordable than any of the other stores, so after a bit too long trying to research different ones on my phone, I decided to buy one more to check off the list.

Thankfully I ran out of days and (known) stores. In the end, I got so many different teas that giving them to her all at once would be pretty insane. I figure I will slowly dole them out over time… one or two as souvenirs, then maybe cover a couple of upcoming holidays with the rest. This way I don’t completely overwhelm her with choices. People hate that, right? 😛

We’ll see how long this idea lasts or whether I break and give her everything at once.

I expect great things. After all most of these places are well over a century old and one is even a Royal Warrant holder. Well, that… and the price point suggests that they better be great. 🙂

We will certainly find out, hopefully in a fair amount of detail over on Tea is my name. Follow along if you will.

Note: Some links in the post are affiliate links which will hopefully help defer the costs of running this blog.