Its the first time, in a long time, that I was essentially packed 24 hours before leaving. Normally I end up packing right up until its time to go to the airport. Even when its a super early flight I normally don’t sleep and pack to the very end. I do not advise this, however, as its a surefire way to overpack. This time I was forced to be ready early because I had to go to work for most of the day.

I had to make stops at a couple of banks in an attempt to get cash in ‘pristine condition’. That’s a weird question to ask a bank teller by the way; Do you have any perfect bills?

US money is accepted in Peru but it apparently needs to be in perfect condition or it will not be accepted, at least as far as I’ve read. I wouldn’t normally even bother, but the guesthouse I was staying in is ‘cash only’ and it seemed good to have, at least as a backup.

When it was finally time to head to the airport I called my Uber with plenty of time to spare. I was feeling fairly relaxed.. all the way up to the point where the man at security couldn’t get my print out to scan(!) After spending 20 minutes in line he sent me all the way back downstairs for official print outs. That certainly eliminated my calm. Especially as it seemed 10,000 people had arrived and were streaming into the security line as I fought my way out in the opposite direction. I hauled ass and thankfully the woman I grumbled my annoyance at on the way back downstairs let me cut out of line and back to the section I was previously in. That was super nice of her.

After that everything was smooth sailing again. I got on the plane and as time passed no one had yet sat next to me. I began praying to the airplane gods to please leave the seat empty. In the end, my prayers were answered. That made the 9.5-hour flight way more comfortable!

On arrival in Lima, I knew I had to collect my bags and go through customs before my connecting flight to Cusco. I’ve experienced this before on connection in Europe. Unlike there, where there has been a counter right after customs for connectors to drop their bags back off, I actually had to leave the terminal, walk down to the next set of doors, and enter the airport as though I were a totally new passenger. Odd, though easy enough here.

Once back through check-in, and on my way to security, I got my first hint that South America wasn’t going to be as “remote” as my mind had conjured. The food court had a Subway, a Papa Johns pizza and even a Dunkin Donuts. (We just got Dunkin Donuts in LA last year!) I even saw a Radio Shack down the hall. Who knew!

Once again, the plane gods were kind and left the seat next to me empty on the next leg of the flight. This part only took about 1.5 hours, but it was still nice to have the extra room.

When we landed in Cusco we exited the plane by stairs on the tarmac so my first interaction with the elevation was going to be immediate. It’s not that I expected to be gasping for air or anything, but I did wonder if I would notice the difference. Immediately no, though while walking up the ramp inside the terminal I did start to feel a bit light headed. I may have been imaging that though.

It didn’t matter too much as I decided to immediately leave town heading to lower elevations where I could acclimate for a couple of days.

To the sacred valley

Thankfully the guesthouse I booked offered to arrange a private taxi from the Cusco airport to Ollantaytambo, which was about 1.5 hr ride. The idea of taking a taxi 1.5 hours seemed insane to me but here it’s really common and in the end, it was only like $45 dollars. If you are a backpacker or traveling on a tight budget that may still seem too expensive, but a cab to the airport in LA can be almost as much for less than 5 miles.

Honestly, the idea of the cab ride immediately once landing was the part I was most nervous about. I didn’t know if the driver would speak any English and it’s a long ride to either sit in silence or struggle to communicate. I also had no real idea at the time what the exact price would be as it can vary depending on what you do along the way.

I picked up my bags and headed toward the exit. I had yet to see anyone with signs so I assumed they must be outside. Thankfully as I walked out I saw a man standing there with my name on a sign. I am still kicking myself that I somehow did not take a picture of that, especially as the spelling of my name was wrong but in a very Peruvian way.  After introducing myself he leads me to the car and off we went. Thankfully he spoke a good amount of English so that helped me relax.

The second he started the car I got my second clue as to how current things are in Peru. “Work.. work.. work.. work.. work…” Yes, Rhianna was playing on the radio. After a few more current songs I would have sworn that we were listening to KROQ, or really any radio station in America. It must be the standard template of any modern radio station these days. Not only were the songs the same, but all the sound effects and transitions were as well.

Once we left the airport I got a mini tour of Cusco as we headed through the historic center of town. I passed all the things I had seen before as I “walked” through town on Google street view. The driver made a quick stop and then we proceeded up a number of narrow, steep and windy streets (filled with stray dogs and exhaust-belching trucks) that climbed out of Cusco. Once out of town though, the land changed to the countryside quite quickly. 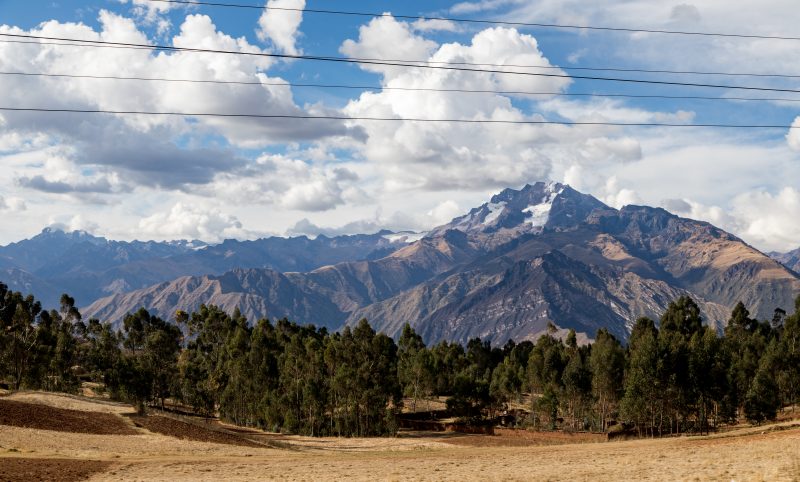 The landscape was gorgeous. The massive mountains in the distance were stunning. Some were even snow-capped. Along the way the driver pointed things out, occasionally asking if I wanted to stop. I was happily snapping away through the window.  Sadly, I was not on top of my game and most of these pics are blurry. It took me more than half the trip to remember to change the setting appropriately.

The majority of the trip was across rolling hills and countryside. The descent into Urubamba and the Sacred Valley was particularly majestic. Once at the valley floor, the road followed the Urubamba river to Ollantaytambo. Once you reach Ollantaytambo the main road becomes cobblestones as it enters the town. Right before the switch, there is a turn off that skirts around the town along the river and train tracks, but from there the road is dirt and gravel.

I’m guessing it was somewhere around 430pm when we reached the town. The way in was bumpy but exciting. Once again I recognized the area from having “walked” these streets on Google street view just days before. Finally, we pulled on to the main square where he parked the car, grabbed my suitcase and lead me to the guest house a couple of blocks away. Rolling a suitcase on a cobblestone road is not the quietest thing, just FYI. 🙂 When we reached the guest house I thanked him and he left me to check in. Oddly he told me to pay the hotel for the ride.

The guest house is really nice. My room, in particular, is beautiful (the Inti Suite). There are two balconettas that overlook the ‘street’ out front.. with its water channel running along the edge as well as views of the Pinkuylluna ruins above.

As I was beginning to settle in I realized that the sun was already setting. I figured I better get outside if I wanted to see any more of the town in the daylight.

The light was fading fast so I just walked along the road we came in on.  I wanted to check out the double gates at the beginning of the town. By the time I got to the gates, it was getting dark so I knew I would need to come back for better photos another day. I headed back to the main square where I passed my driver sitting on a bench with some people, presumably waiting for someone who needed a taxi back to Cusco. 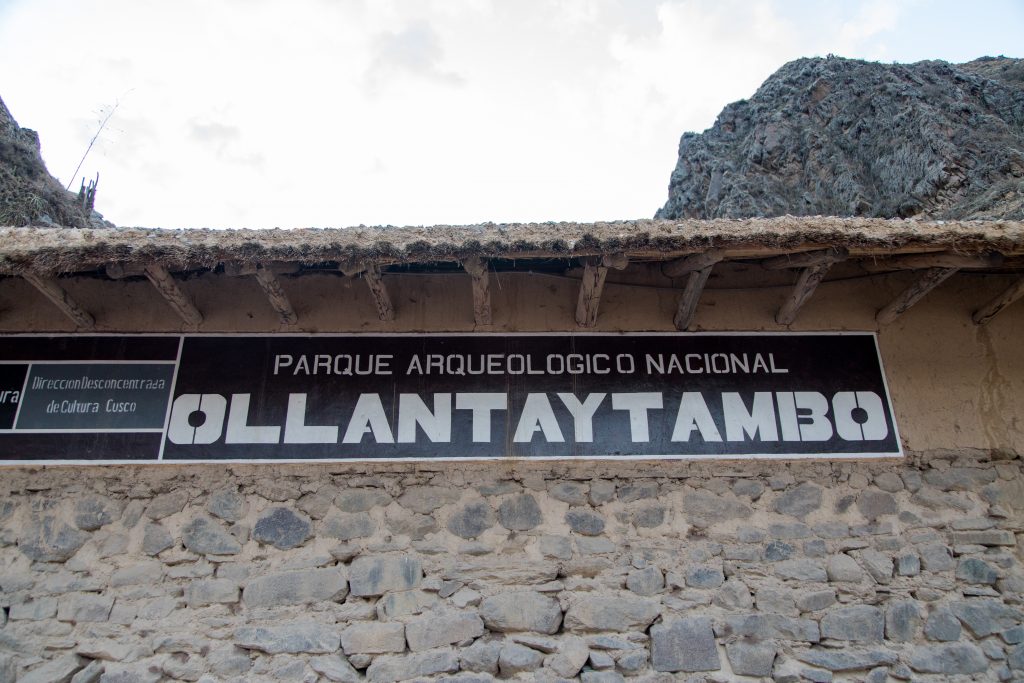 I wandered over to the entrance of the main archaeological site and perused some shopping to make some notes on what I might want to go back for. I grabbed some supplies for the night and went back to the room to try to pick a place to have dinner. Eventually, it occurred to me that looking for a place online was dumb and that I should just pick a place while out.

Indecision got the best of me of course and I eventually decided to just go to a place facing the Plaza de Armas that seemed the busiest and grabbed a table outside. I had quinoa soup and a small pizza which was nothing special, but it did the job and I was having fun people watching. I had a couple of glasses of wine and was feeling fine. I realized at that moment that I had finally relaxed. The hard part of getting there was over and now it was time to explore.

It was getting close to closing time, and the number of people out and about was becoming less and less. So I paid up and decided to go on another walk through the narrow cobblestone streets of the old town. I was feeling good from the wine and I really love to go for night walks, especially when traveling. It’s just something I always do.

The town is really old and really beautiful. It has been continuously inhabited since Incan times. Its also occasionally a little creepy as its super dark and the “roads” are very narrow. There is literally no one around and all you hear is the rushing of the water in the channels. I was taking pictures and occasionally being startled when someone else would randomly come around a corner.

Eventually, I decided I should call it a night and go unwind, download my camera cards and make plans for tomorrow. It was only 1030p but here that seemed REALLY late. Tomorrow I think I’m going to start the day at the ruins.

As hoped, all is well and adventure is on!